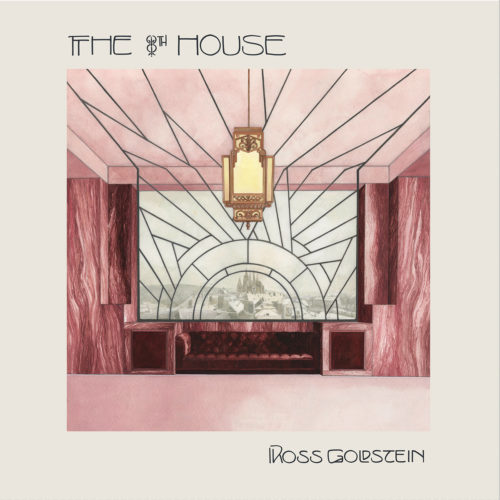 The last we heard from Ross Goldstein was his second solo album Inverted Jenny, a collection of blissful and exploratory orchestral pop that arrived in the late summer of 2017. Just a little over a year later Goldstein returns with The Eighth House, a complete shift of gears that finds him immersed in a cinematic dreamworld of instrumental sounds that still hold glimmers of the psychedelic spirit inherent to everything he touches.

The initial inspirations for the album began during sessions for Inverted Jenny, an album where Ross actually recorded and then removed vocals from many songs, opting for instrumentals that said more than lyrics could. Already leaning towards exploring deeper expression with instrumental compositions, he entered a phase of obsession with science fiction books and movies, as well as listening closer to soundtracks and incidental film music. Turning to an arsenal of classic Chamberlin and Mellotron sounds, he began composing the pieces that would become The Eighth House, fantastical and often slightly damaged scores to imagined scenes of both cosmic and Earthly.

While plenty of homage has been paid to the anxiety-heavy synthy soundtracks of 70’s b-movie horror flicks or the acid rock freak outs that soundtracked movies from the early days hippie subculture, The Eighth House goes in a very different direction. More than those popular entry points, the music here is subdued and slow-moving, curiously inspecting ideas as the album moves through various fantastical passages. Even when cartoonish sound effects meet with tense swells of strings or dramatic orchestral flourishes (early Chamberlin models recorded their sounds using players of the Lawrence Welk Orchestra, no less!), the result is never garish but always patient and communicative. Bells ring in the distance, memories and possibilities are implied but left open to interpretation and strange but friendly sounds linger for just a moment before melting into something else. The result is a muted and wintery paradise that envisions Smile-era Brian Wilson scoring the softer moments of a Jodorowsky film.

What’s most striking about The Eighth House is how much of Goldstein’s sonic personality comes through, even in music that’s in some ways striving to disappear into the background. Whether it’s lilting chamber pop, the screaming psychedelia of his band Fogwindow or in this case a slowly-unfolding narrative of celestial instrumentals, it’s all unmistakably Ross, reflecting an intrinsic kindness that’s always at odds with a restless searching. It’s definitely present on this album of drifting wordless compositions, as he offers us ripples of boundless imagination and just-out-of-reach impressions of other worlds.