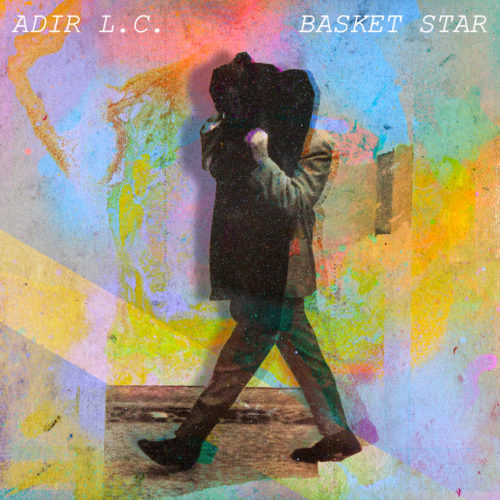 On Basket Star, the well-traveled New York songwriter and studio savant Adir L.C. epitomizes a new breed of troubadour: one who not only writes songs as he passes through but arranges and records them on the move as well. He assembled the record like a postmodern folk Bard, collecting and orchestrating tracks, sounds, and creative contributions to share on his way. A savvy folk-pop craftsman with a track record, Adir coaxed Basket Star to life as he moved from one ad-hoc studio to another: Brooklyn apartments and practice spaces, an aunt’s house in Vermont, a studio outside Binghamton, New York, and more.

Adir’s baseline sound is a heady blend of millennial indie: a freak folk earthiness meets the big-din symphonics of “collective pop,” with accents of tin pan alley, jangle, soul, and street corner brass band. The living-as-producing recording process lends Basket Star an accretive complexity but one steered by the steady hand of a veteran auteur, courting the chaos for its surprises and its fertility (with a big assist from mix engineer Aaron Adams).

The indie jazz ballad “Best Version (of My Short Life)” kicks off the record on a lush and sophisticated note. The standout second song, “Big Bad” as well as the strong single candidate “Pink Cloud” find Adir back in his deepest pocket—jangling, achingly melodic indie folk-rock. The gently rocking acoustic title track demonstrates one of his most striking gifts as guitarist and singer—an easy swagger that makes all this flowing musical richness seem unconscious, almost accidental.

Like so many of the poets of the new century, Adir writes with gravity and serious moral purpose, but Basket Star never approaches preachy didacticism. Adir is too much of an offhand impressionist and street surrealist in the Stephen Malkmus tradition for that to happen. His inventory of self and society is carried along on a lax, permissive river of language, image, and snaky melody, and his quest is on perpetually shaky ground.

A sense of crowd enlivens Basket Star, expressed in layered harmonies, Salvation Army brass and occasional family-style percussion. Adir has long had a nose for community. He came of age rocking in the same New Jersey basement shows as his older friends in Titus Andronicus and Real Estate. His college years in New Paltz, New York, were spent spearheading a now thriving DIY scene, and living at Salvation Recording, the studio that later helped hone several debut albums for acts like Porches, Diet Cig and others.
When Adir relocated to Tel Aviv for two years, he quickly connected with the progressive music scene there and produced the well received Oceanside Cities, a fastidious record as high-gloss and precise as Basket Star is organic and comfortably imperfect. Oceanside Cities still gets enthusiastic airplay in Israel, and close friend and multi-instrumentalist Eden Barel flew in to make significant contributions to Basket Star.

Upon returning to the United States, Adir moved in with lifelong collaborator Cameron Wisch (Porches, Cende, and Sheer Mag) and members of LVL Up at the infamous Brooklyn house venue ‘David Blaine’s the Steakhouse’. There began the process of what would eventually become Basket Star, to be released by Birdwatcher Records on May 17, 2019.

Big Thanks to my family, my partner Britt, all the steak-holders at DBTS, Birdwatcher Records, Eden, Cameron, Chris and the rest of my amazing band, and everyone else that helps make this project happen and that makes my life such a good one.

*** “A Little Love Couldn’t Hurt” is an interpretation of Alon Eder’s “Ktsat Ahava Lo Tazik”, translated to English and transposed by Adir L.C. ***